Vitan mythology includes ten mythic beasts. They are not part of the Circle Pantheon, but in certain cultures are worshipped alongside the gods as demigods.

Despite their name and purported supernatural qualities, mythic beasts actually exist. In fact, there are a number of them living in Anaxas. They are mysterious, and their language cannot be understood unless the beasts wish to speak directly to a person (which is extremely rare). Their fearsome appearance belies their true nature, as they are peaceful among each other - a mythic beast will never harm another mythic beast. For the most part, they will not harm mankind either; hatchers are the exception.

All mythic beasts have a deep and instinctual relationship with the mona, and wield a wild, untamed magic of their own.

Of the mythic beasts, only hatchers have ever been seen in groups. All other mythic beasts are assumed to live solitary lives. There are some rumors that there are in fact only one of each, rather than an entire species. The only confirmed Mythic Beasts that have any known population would be Hatchers. While they are dismissed as children's stories these days in many Kingdoms, there have been rumors of sightings. 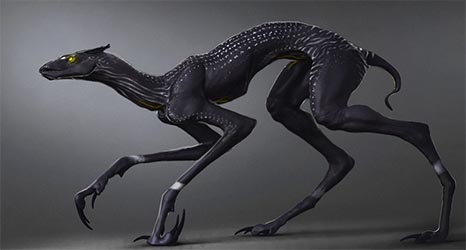 Long, lean and lithe, hatchers are feared worldwide. Their name comes from the ancient term Ha'tcheth, rarely used by anyone outside of Anhau. They are known to kill galdori and other races who come across them. They operate on a hivemind, or collective consciousness.

Hatchers emit a mist that shrouds them entirely, often covering miles and miles of terrain, and move in large groups. The mist they exude cancels magical will, making it impossible to cast. They are the ultimate killing machines - swift and silent, with fine-tuned senses, sharp teeth and claws, and rapid reflexes. It is said to be impossible to kill a hatcher, and few have tried.

This is an artist's approximation of what hatchers look like; an accurate picture is impossible, as they have never been seen properly by anyone, or at least no one who has gotten a really good look has lived to describe them. 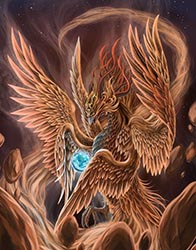 Aerra is an enormous, flighted birdlike creature, known as the most mysterious of the mythic beasts. It lives deep in forests and does not communicate with people of any race. In myths, Aerra would sometimes communicate with lost children, aiding them in some way, but this has not occurred in recent memory. The scientific community has been most interested in Aerra, and many expeditions seek to discover it in its natural habitat, but these attempts have proven fruitless. Aerra is never seen unless it wishes to be seen.

This is a visual approximation of what Aerra might look like. As it has not been sighted in some time, this is not an entirely accurate image. 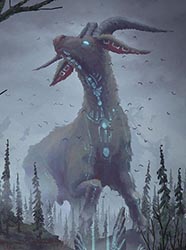 Bambusi is a tall goat-like creature. It is a kind and gentle animal who inhabits the mountains of Hox. The Bambusi has a special relationship with the humans of Hox, sometimes allowing them to view it or even approach it. 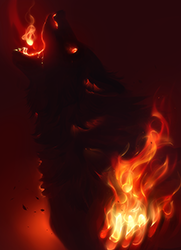 Daegerote is a beast of legend, never seen by any modern humanoid. Ancient texts and engravings indicate it is a huge canine made of smoke and flame, that once inhabited the deep underground caverns of Gior. The sound of its voice was said to inspire even the meekest heart. According to some texts, it was once seen as a guide for the lonely and downtrodden, appearing in time of most despair. 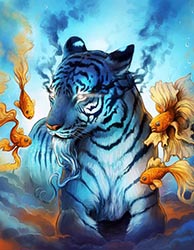 Dapao is an enormous water tiger that inhabits the ocean and will come on land to live in lakes as it sees fit. It is ancient and wise, and is among the only mythic beasts to ever communicate with humanoid races. When it speaks, it often warns of danger; it seems to have innate understanding of the human condition and uncannily up-to-date knowledge about the goings-on of the human world. It is bluish in color, with piercingly white eyes, and long fur. 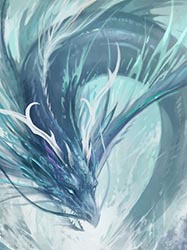 Fjarnegoth is a scaled, aquatic beast, somewhat doglike in the face, with a long, lithe body. It has a distinguishing mane and tail of white hair. Fjarnegoth lives in the ice to the north, in regions where no man has visited in many millennia; it is only spoken of in tales of Roannah, sometimes given the ancient name of Roth.

In stories, it is said to be the kindest and gentlest of the mythic beasts, but fiercely protective of its sacred land and the people it protects. 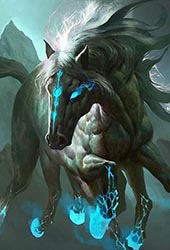 Often mistaken in text for a horse, Ilmanie is a many-legged beast with equine features. Its body seems to be stormclouds wrapped around living lightning, with this electricity leaking out through its hooves and eyes. Known to ride the storms, Ilmanie has only ever been seen during the worst typhoons of the rainy season. To see Ilamnie is to be given knowledge of something yet to come, a mental link connecting the person to the beast's mind. This can be overwhelming if the person does not have a high mental aptitude, and old texts speak of madness inflicting those unlucky enough to catch the attention of the Ilamie. 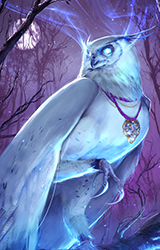 The smallest of the mythic beasts, Ptheoric is an owl-like creature approximately six feet in height. It is white, with smooth soft feathers and ethereal blue eyes that seem to seep ectopic energy. It is said that Ptheoric tends to appear at the moment of one's death, as though ushering the soul into the afterlife. At least, that's what the texts say. No healthy, living person has ever seen it, therefore the only knowledge of it is through the textbooks and ancient engravings. According to the lore, Ptheoric has a hauntingly beautiful voice, though no one has ever been able to translate what it says if they've survived their encounter at all. 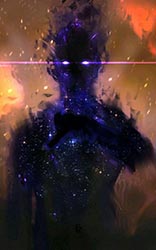 Shalok is the only incorporeal mythic beast known, also the most mysterious. Known as the wanderer, Shalok is often seen as a humanoid figure containing the night sky within its form, eyes like two violet stars. Many people have seen Shalok, but only at night as a nocturnal creature. It never stops to engage anyone, merely wanders by, as though passing through. Sightings can range from seeing it in full view and with ease, to just a glimpse from the darkness out of the corner of one's eye. Its habitat seems to be open plains of space, rarely caught in densely wooded areas. Some people are scared by its unusual appearance, but there are no texts or records of it being aggressive. Then again there are no records of it being friendly either. 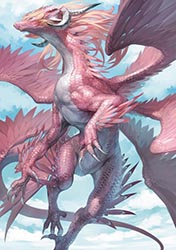 Vradire is a saurian, similar in size to the Aerra. It typically lives in mountainous terrain, but can also be seen occasionally in forests. Like the Aerra, it is uncommunicative with people.