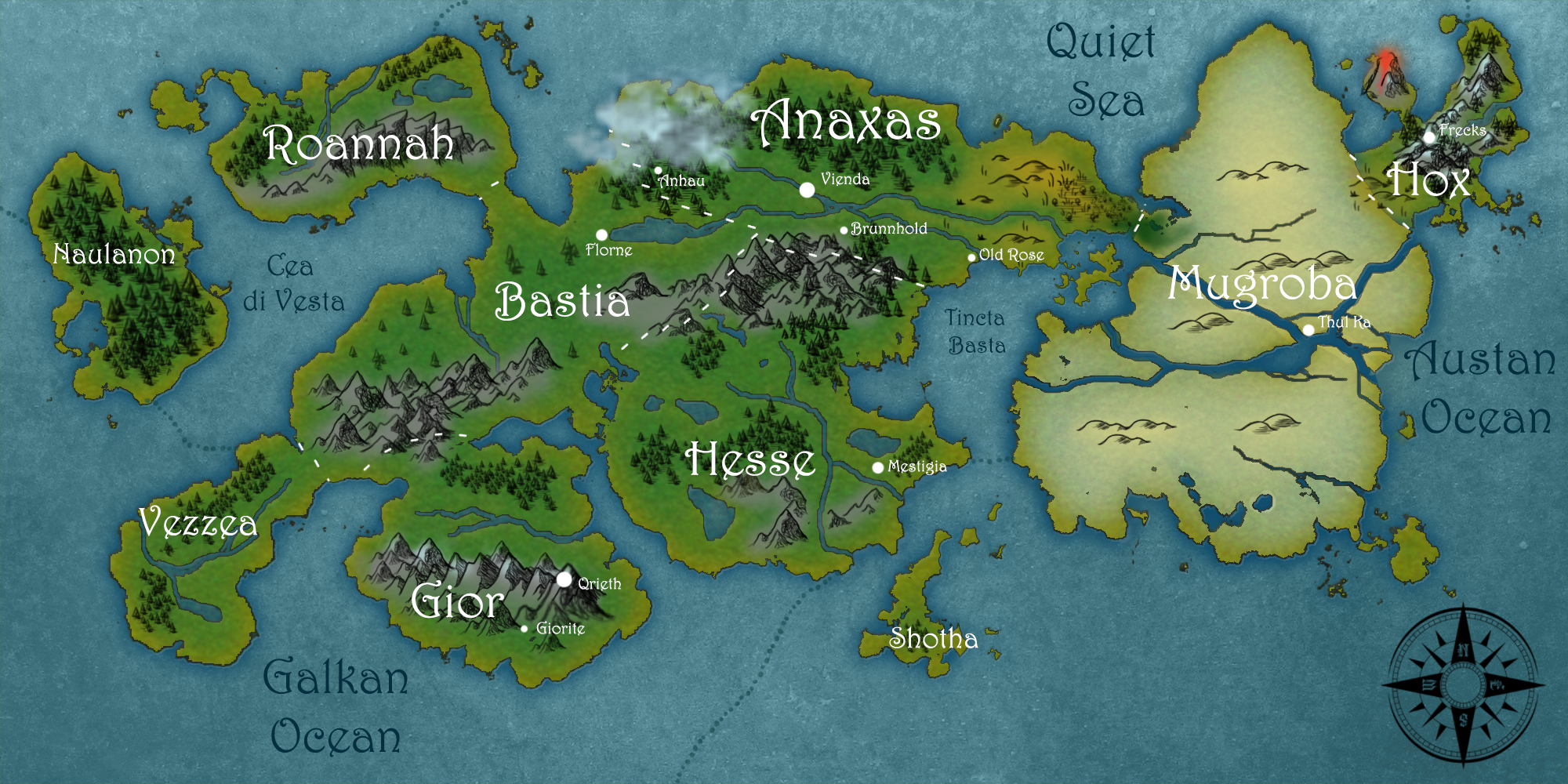 This page lists the Ten Kingdoms, and individual cities within them. Click on the names of each kingdom to see the main article for that kingdom. The individual kingdom articles have information about the country as a whole, while the location links have information about the city, town, island or area as well as links to specific RP locations. Some town names are not described with a link; you're welcome to use your imagination, and reference these locations in your character's backstories or roleplay.

Below the list of Kingdoms, you will find links to maps of the Ten Kingdoms (the Headlands and the Vales), including a detailed map of Anaxas.

Please see the Travel Times for an idea of how long it takes to get around the main areas of Anaxas and beyond by various transportation methods.

The remaining six kingdoms have very different, autonomous governments and cultures, all with galdori in power over the so-called lower races. They are ruled by an overarching government, called the Symvouli that rotates from one Kingdom to the next every ten years, following a cycle that has been adhered to for centuries.

Anaxas is known throughout Vita as a successful and advanced kingdom, but unfortunately, it is also one burdened by the constant threat of civil war. The social situation in Anaxas is volatile and oppressive. Plagued with unrest and political turmoil, racial tension and derision, this Kingdom is attempting to lead by example when it clearly isn't.

The roots of the Resistance are here in the shadow of the most prestigious magic school in the Six Kingdoms, Brunnhold.

Bastia is a wealthy and luxurious country that has lately fallen into unstable economic times due to irresponsible deforestation and poor economic decisions. Bastians have a similar culture to their Anaxi neighbors, though they are distinct for their rather zealous appreciation of the arts, fashion, and fine living.

They also do not obsess over knowledge in the same way, far more focused on creative expression than academia when it comes to monic relationships.

Located to the south of Anaxas, Hesse is a rugged kingdom best known for its gold mines and the dying art of drake taming. Hesseans are known to be a people who respect physical prowess and cunning, even more so than most of their galdori counterparts, and their appreciation of strength and the outdoors is unrivaled in the Six Kingdoms.

Ritualized combat and magical dueling are a huge part of Hessean culture, considered the most feared in all of the Six Kingdoms.

Hox is a mountainous, isolationist kingdom located north of Mugroba. Its society is reserved and quiet, known for its hardy independence and rich spiritual culture lived in defiance of the harsh, frozen landscape. Having recently rejoined the Symvoulio with great reluctance, Hox is attempting to navigate relating to the other Kingdoms very carefully.

Gior, a kingdom to the south of Anaxas, is a beautiful and natural country with many livestock farmers. The galdori live in canyons, in cities carved out of mountains themselves, deep in their depths. Giorans of both human and galdori decent value hard work and independence, even if they live almost completely separate lives from each other.

Mugroba is a vast desert nation located to the north of Anaxas. It is a prosperous and spiritual country, and Anaxas' greatest ally. Mugrobi people worship the water, which they depend on for trade. As of 2720, Mugroba is now the seat of the Symvoulio, the overarching unified government that keeps the very different Six Kingdoms working together.

This Kingdom is open for play ].

The deep forests of Naulanon are mostly uncharted, but the tales related by explorers tell of vast tribes of galdori, uncivilized and rough, and of bodily sacrifice to the Death god Naulas. It is a terrifying and dark place, and only the bravest dare venture there.

According to various accounts, there does not seem to be a human population in Naulanon; the popular theory is that the humans were all sacrificed to the gods centuries ago.

Shotha is the southernmost country in the Ten Kingdoms, and also the most mysterious. It is a primitive jungle kingdom that has limited contact with the outside world.

In the lush forests of Shotha, a race of humans and galdori live together peacefully, defying all convention. Among the ruins of an even more ancient civilization a rare example of cooperation thrives, baffling all who visit ... should they survive.

Vezzea is mostly a petrified forest of thick and tall trees. The area is largely unexplored - the last societies of tribal galdori are said to have died out many years ago. Hatchers roam the land now, making it impossible to get very far into the territory.

Once a thriving and powerful nation, Roannah was reduced to cinders after the War of the Book. It is now covered by covens of hatchers and thought to be cursed.

While your character can come from any of the Six Kingdoms,
they cannot hail from Naulanon, Shotha, Vezzea, or Roannah.