The Circle Gods are a pantheon of gods, arranged around a wheel in a specific order. The religion related to the worship of these gods is known as Circlism, and believers are called Circlist. (Because the religion is so widespread, these terms are antiquated; it is rarely necessary to announce oneself as a Circlist.) 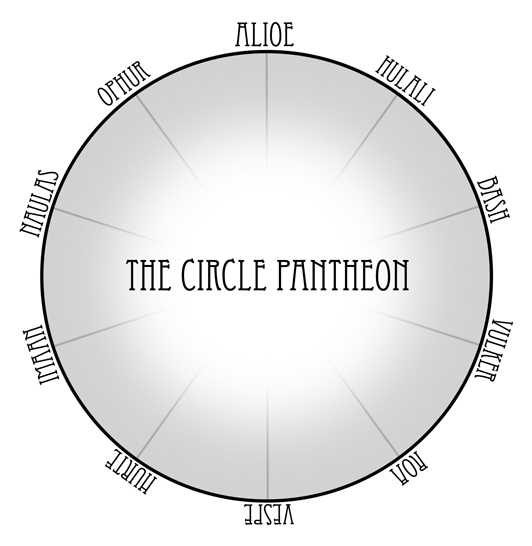 The Circle Pantheon is made up of ten gods. Each of The Ten Kingdoms belongs to a specific god, which is venerated above all others in that kingdom; this god is known as the prime god. The other gods are also worshiped, but to a lesser extent.

Each god controls a domain, or area of expertise (see chart below). The gods themselves are depicted according to an aspect - for example, the goddess Alioe is always depicted as the moon. This aspect relates to the mythology surrounding the god. The individual cultures of the Ten Kingdoms are directly influenced by their prime god, their domain, and their aspect.

Circlist legends teach that the gods once occupied a divine realm of pure mona. At the beginning of the universe, this realm was broken apart by a vast storm; the gods were thrown from their home into space, clinging to a single remnant. This chunk of their former world became their new home; they shaped it into a perfect sphere, and arranged themselves around it in a Circle.

Not only does this myth deny that the Circle Gods created the world, it alludes to the possibility of other gods, ones that exist on other "remnants" of the divine realm. Sometimes, a myth will mention an evil force, presumably an invading god from another world; the Circle gods will always fight off the invading god. There is an undertone of civil war amongst the gods, many of whom are thought to travel the universe looking for a permanent home such as Vita. (In Circlism, Vita is thought to be the perfect world.)

The Circle Gods regularly commune with one another, and are thought to act with a hivemind, without any god having knowledge another does not; there are exceptions, notably in the mythology surrounding the fall of Roannah, where each culture claims their prime god acted against the will of the others.

In galdori legends, the gods care most about the galdori; this is vastly different from human interpretations, which claim that the gods do not give priority to one life over another. The egalitarian approach of the human mythology insists that the human races are no more important to the world than plants or animals. Indeed, humans often reject the Circle Pantheon in private, choosing instead to worship the world god Vita, who espouses these ideas of living equality.

Although it is accepted that the gods are equal, their qualities are of particular importance to each culture. For example, Mugrobi mythology focuses on Hulali, a fish-headed god who rules over the water. Because Mugrobi economy revolves around river trading, they revere the god that is closest to the water.

Some aspects (such as Hurte, the God of Beauty, who appears as a tiger) seem to stem from ancient myths rather than canon Circle mythology - in ancient tribal religions, tigers were considered perfect beings, and the representation of Hurte might be a remnant of those old myths.