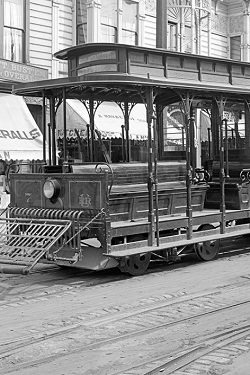 Beneath many of the busiest streets of central Thul Ka run great cables which are pulled in endless loops by great hydraulic engines. To these cables, cars of painted wood and shining brass are attached and conveyed about the city at constant speeds. This allows persons and goods to travel great distances without the need to resort to coaches or rickshaws.

The cable-ways of Thul Ka are a recent invention. Nevertheless, in the decade and a half or so since the first reliable system began operations, they have become an invaluable, highly profitable, and even much beloved symbol of a city where innovation and commerce are held in high esteem. Citizens and visitors alike can take the cableways throughout the many neighborhoods of the city; the different lines connect easily, and while not every part of the vast metropolis can be reached by the cable-ways, they can be used for nearly any cross-city journey.

In accordance with the heat of the city, the cable-ways are generally made with an open design; this can be uncomfortable during the rainy season, but even then muggy heat makes closed walls undesirable. Most cable-ways on most journeys tend to be crowded, with galdori, imbali, wicks and humans all found together in the same cars, moving easily around one another.

All of the Thul Ka’s cable-ways operate upon the same principles: a constantly moving cable, and cars which can attach and detach at the command of the car’s operator.

The operators, called grips, are required to be prodigiously strong to safely work the gripping mechanisms and brakes. So strong indeed that nearly every grip to date has been uncommonly burly humans. A few wicks have succeeded in joining the ranks of the grips, but not a single galdor has ever come close to joining that profession.

In addition to the grips, there are the conductors whose job it is to collect fares (often very modest fares for the cable-ways serve rich and poor alike), advise passengers upon how to get to the destination, and deal with any other concerns to that the grip can focus upon the difficult task of controlling the car.

There are also a number of mechanics, engineers, and other administrators who work with the cableways. These tend to be disproportionately galdori, although some imbali and humans have also managed to join their ranks.

You can get to most places in Thul Ka through the cable cars, and usually with only a few changes, depending on where you want to go and how willing or able you are to walk. There are a few major lines - namely, the Central Line, the Dejai Line, and the Industrial Line - and a dizzying network of offshoots, newly spreading throughout Thul Ka and growing.

The line mostly associated with Cinnamon Hill residents and Thul'Amat students. It runs through Cinnamon Hill, Hluun, and Dejai Point, with a stop in Nutmeg Hill that transfers to the Central Line.

The largest cableway in Thul Ka. If you ever get lost, you can find your way to the Central Line and reorient yourself. It runs most prominently through the Windward Market district, though it extends to Aratra and the Ashu'tei Palace on one end and Three Flowers on the other, where it overlaps with the Industrial Line.

Mostly used by workers in the industrial neighborhoods of Thul Ka, this line goes through Three Flowers, but also has stops in the Gripe, Carptown, and the Pipeworks.

This is by no means an exhaustive list. We encourage players to improvise offshoots and minor stops in neighborhoods and streets unmentioned here; Thul Ka is a massive city, and the locations and cableways listed cannot account for all of what can be found there. For example:

These are only a few possibilities! If you have questions, don't hesitate to ask a mod.

Thul Ka is a vast city, and to traverse it fully is a task for which few urban travelers are suited. A variety of options exist for the urbanite who wishes to spare his feet the weary task of walking through the labyrinthine streets, risking blisters, shin splits, or becoming lost and stumbling quite unintentionally into a dangerous region where thieves and murderers stroll freely beneath the all-pervading sun. Carriages, hired coaches, omnibus coaches traveling fixed routes, and rickshaws are all to be had for price, but even these conveyances are not sufficient to quickly and efficiently move so many millions about the city.

In the decades leading up to the twenty-eighth century, there was a great noise made in many quarters about the wonderful, mechanized, and gloriously modern future that awaited Mugroba: a future that would surely propel Mugroba, already more advanced, far ahead of its neighbors and rivals. Great industry and ingenuity, along with even greater sums of money, were invested in all manner of wild, mechanistic ventures to improve the life of the city. One of the more successful of these were the cable-way transit lines which now aid in reducing the nearly intolerable congestion of Thul Ka’s streets.

Cable and track vehicles had been used in mining for ages but these systems were always cumbersome and ill suited to large-scale people moving for they relied on counterweight cars and could only travel in straight lines. The Nutmeg Hill Funicular Company, which formed in 2682 to great applause and promises of ‘An End to Congestion in Our Time’ only to collapse due to unpaid debts and constant cost-overruns in 2684, offers a cautionary tale. Several other funicular companies formed around this time, but they too suffered a similar fate. Still, the general idea of moving people about by cable persisted and experiments into all sorts of unlikely methods were made.

It was not until 2703 that Setemi pezre Bose arrived at a solution that would make cable-based transit feasible on any kind of scale, though it would take her another seven years to perfect it. Her innovation was to couple a constantly moving cable with cars equipped with a specialized gripping system which allowed the cars to attach and detach to cables as needed. Suddenly, counterweight cars were no longer needed, and ada'na Setemi’s company, The Cinnamon Hill Cable-Way, was a great success.

Since that time, a number of other cable-way operators have entered the market, though for the most part they do not directly compete but rather operate in different parts of the city. This is not out of any sense of politeness or respect, but rather a nod to the very great expense of setting up such a system and the still-unconquered difficulties arising from having multiple cables operating beneath the same streets.