The scent of sea and salt is intense in Old Rose Harbor. The sun shines brightly over the dilapidated buildings and into the sandy streets, which are littered with drunks, whores, and market stalls. 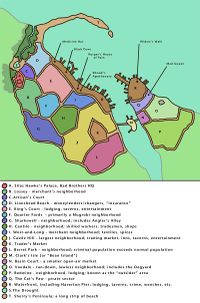 Wrapped around the Mahogany Bay like an eel coiling around its prey, Old Rose is a city boasting a substantial (but transient) population of pirates, traders, beggars and layabouts. It is a veritable hotbed of capitalism, crime and carousing.

Still, the place is not without its charms. The call of the sea mingling with the cry of the gulls gives a feeling of coming home to one’s proper place in the world. Long, white beaches glow in the day’s light. The feel of the breeze and the taste of the air are like lost memories brought back from long ago. Many seafarers are glad to call Old Rose their port.

Within Old Rose, order is kept by the crime lords. No murder or unauthorized trade goes unnoticed by Silas Hawke, the King of the Underworld, or his cronies (known as the Bad Brothers.)

Though hardly glistening with promise, the narrow streets of Old Rose had a certain rustic charm about them. Tall, stacked houses made of storm-warped wood, bits of drift and debris were painted bright colors, lines of yellowed washing hung across gaps and alleys. There were places where the streets gave way to wooden walkways, and the bay's water was allowed to flow throughout the city in a sort of makeshift canal; the only way to get from place to place was across boardwalks, bridges and planks, sometimes hopping across a broken gap."

If you're looking for work, and aren't too particular about the type or legality of said work, this is the place for you. Take a walk to one of the many taverns, and you're sure to run into someone who will do business with you - just be sure to go armed. The Trader's Market is a good place to begin, if you have a loud voice.

Old Rose Harbor is the central hub of the spice trade from the Muluku Islands. Apart from that, it brings in the majority of luxury goods from Mugroba - silk, jewels, and above all, exotic and unpublished spells (many of which are questionable in nature). For this reason, the galdori stay away from Old Rose, and do not attempt to enforce their laws.

The underground trade route is known as the Vein, and is led by Silas Hawke. It traffics mainly opium, but also illegal guns, human slaves and dangerous spells. For decades it has remained unchallenged in Old Rose, but recently, a rival vein has appeared, and it's cutting into Hawke's market share. As Hawke attempts to secure his hold on Old Rose, many residents are feeling the strain of heavy taxes and brutality from the Bad Brothers.