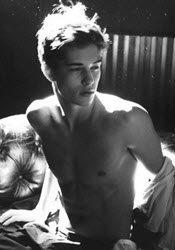 Dorian Slick is a twenty year old human. He is a slim, wiry young man with a mop of brown hair and rich sable eyes. Polar opposite of his best friend Taegan, Dorian can be a sensitive soul, and his happy go lucky handsome smile wins over many a pretty girls heart. He was born in the little mining town of Coombe-dale to a miner and his wife. His mother died during childbirth, leaving the man a single father who still had a mouth to feed. Therefore, the young brown haired lanky boy with a bizarre ability to bend his joints in most unnatural ways spent a lot of his early youth in the mine with his father playing in the tunnels. Eventually however, he found himself venturing into the village, getting himself into all sorts of trouble either stealing from the local markets or grossing out the other children.

In 2708, Dorian’s father was killed in a cave in, leaving the boy an orphan. He spent his time stealing to survive and running from the dismal Seventen assigned to the village. Starving, naught but skin and bones, Dorian ran into Winslow Coors right in the middle of town. The older man took a shining to the boy, feeding him and taking the human on his travels across Anaxas. It was with Winslow and a group of Laughing Sky wicks that Dorian learnt the art of fire breathing, and sword swallowing.

Whilst in Ballast during the summer of 2711, Dorian met Taegan Jank, and immediately the two boys formed a tight friendship. Where ever there was Dorian, there was Taegan. The two teenagers grew even closer as they travelled with Winslow, eventually meeting Balder King in 2712 and becoming part of Balders Circus.